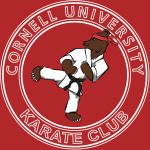 Cornell Karate Club began as an extension of the Cornell Karate PE class, but, over time, our club has evolved to encompass a broader view of martial arts by looking outside of traditional styles of Karate. At this club, we remain unaffiliated because we firmly believe that no single style of Karate-- or brand of martial art, for that matter-- contains all of the answers to the problem of self-defense. Because of this, we seek to learn from many different styles. We currently have black belts in Shito-Ryu, Goju-Ryu, Shotokan, Isshin-Ryu, and American Kenpo. Some of our members also have experience in Thai Boxing, Taekwondo, Brazilian Jiu Jitsu, Aikido, and Kobudo. We seek out other styles to learn from, and encourage you to help teach us if you have something new to bring to the table!

As with all martial arts, Karate, at its core, was created for self defense. We know that which martial art you study does not truly matter as long as you can defend yourself with reasonable confidence. But we also believe that the mentality that you carry with the weapons you develop (your whole body!) is critical. In Karate,  each style values slightly different ethics, but as martial artists, we all believe that "the ultimate aim of Karate lies not in victory nor defeat, but in the perfection of the character of its participants." --Gichin Funakoshi

Our group currently hosts black belts in Shito-ryu, Shotokan, Goju-ryu, American Kenpo, and Shaolin Kenpo.  Club practices are designed to have both some time dedicated to both instruction and open mat.

Our established club hours are Saturdays from 3:00 - 6:00PM in the gymnastics room at the 2nd floor of Teagle Hall, unless specified otherwise.  E-mail us at karateclub@cornell.edu, or request to join our mailing list by E-mailing karateclub-L@cornell.edu, to receive updates on meeting times and locations!

Download and print out a copy of our Karate Liability Waiver! You'll need to sign it and turn it in to us before participating in any club activity!