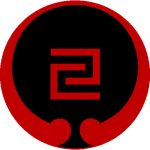 Goju-ryu was developed by the grand-master Chojun Miyagi from the Okinawan martial art known as Naha-te (“hand” of Naha).

"Go" means hard, and "ju" means soft, alluding to goju-ryu's powerful punches and circular joint locks. Goju-ryu is best known for the kata Sanchin, which is practiced as a technique drill, breathing exercise, and for body conditioning.

Another training technique unique to Goju-ryu karate is the Kakie, which means “sticky hands” or “pushing hands”. It is a traditional form of Okinawan training similar to sticking hand practice from the Chinese Martial Arts such as Tai Chi and Kung Fu. Kakie is used to condition the arms while teaching sensitivity to whether the contact is heavy or light, and allows one to acquire a sense of the intent of your partner before they actually move so you are immediately ready to counter his movement.

Goju-ryu incorporates both circular and linear movements into its curriculum, combining hard striking attacks such as kicks and close hand punches with softer open hand circular techniques for attacking, blocking, and controlling the opponent, including locks, grappling, takedowns, and throws.

Seiunchin - "to control and pull into battle"

Shisochin - "to destroy in four directions"