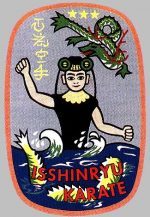 Isshin-ryū (“one heart way”) karate was founded by Tatsuo Shimabuku on the island of Okinawa in 1956.  Isshin-ryū karate is comprised largely of elements hailing from the Okinawan karate styles of Shorin-ryū and Gojū-ryū, as well as the weapons systems of kobudō.  Following the defeat of Japan in World War II, Shimabuku taught Isshin-ryū to a number of American Marines stationed on Okinawa.  The most notable of Shimabuku’s marine students are Harold G. Long and Donald Hugh Nagle, who are responsible for bringing the art to America.  In Okinawa, the two most influential Isshin-ryū practitioners are Angi Uezu and Kichiro Shimabuku, Shimabuku’s eldest son.

The art of Isshin-ryū emphasizes fast techniques aimed at vulnerable target areas, as well as speed and agility in movement.  Much of the art is preformed from an upright stance, known as Seisan, which allows for quick movement while remaining balanced with a solid foundation.  Students of Isshin-ryū learn a number of upper and lower body basics to enforce proper technique while preforming kata and kumite (sparring).  Many of the Isshin-ryū kata have origins in the styles of Shorin-ryū and Gojū-ryū, but have been modified to reflect the strengths of Isshin-ryū.  The art also consists of several weapon forms from kobudō.  The traditional weapons used in Isshin-ryū forms are the bō, sai, and tonfa.  In addition to the various physical aspects of Isshin-ryū karate, a student of Isshin-ryū learns discipline, respect and humility.  The goal of the art is to improve oneself physically, mentally, and spiritually.  As Shimabuku once said of the name Isshin-ryū (“one heart way”), “all things begin with one.”